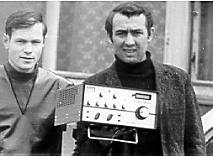 HA6KNB the callsign of our clubstation could first be heard in 1957 using a 50 W transmitter and a receiver manufactured by a small Hungarian firm. The operators were active on the 80 m band first, on 40 m and on 20 m a bit later. The secretary of the club was Mihaly Veres (HA6NB) -till the late seventies. The first members were HA6NB, HA6NC, HA6NE, HA6NF, HA6NI, HA6NJ, and Akos Huszar, Pal Gulya, Istvan Palocz, Jozsef Palocz, Laszlo Pataki -just to mention a few.

During the early sixties, several members of the club were succesful fox hunters too. Based on this tradition some 15 years after, young followers of the pioneers won local and national contests as well. While several technical minded fellows were constantly building pieces of equipment, the operators of the clubstation -who became licenced radioamateurs afterwards- started using the VHF and UHF bands mainly during Field Days as portable stations from the Salgo later from the Karancs hill.

Those that belonged to our club were e.g. HA6OK,HA6OL, HA6OM, HA6ON, HA6OP and HA6OQ, not to mention HA6OZ. The sad passing of Istvan Dicse HA6OQ who was an outstanding personality is still an aching loss to all of us. The majority of the licenced colleagues and instructors like Laszlo Ildzsa has held several courses. The group of beginners were organized around several clubstations. Beside the main station the crews of HA6KNI and HA6KNP was active till 1989.

Almost all of the amateur radio operators mentioned before became acquinted with the field of electronics and decided to learn electronic engineearing mainly at universities. Having their degrees, all of them are remarkable personalities of the technical intelligence of Salgotarjan. The arrival of factory built transceivers made it possible to take part even in SSB contests.The very first of them was a Hungarian made Telrad 200 was also manufactured by HA6NI and HA6NJ, with the help of the famous factory ML.

The big step forward was the building of the contest station for HG6N on Karancs Hill (729 m asl) in 1979 lead by Andras Bato, HA6NN. Thanks are due to the Headquarters of Civil Defence Authority of Nograd County, to Professional Driving Sch

ool, to the crew of the Electric Centre of Northern Hungary and a Construction Coop. Without their help the home of HG6N would have never be

come a reality. The leadership of the local sport life has always been accepted RCS. We have been getting financial support according to the budget every year. The continuous technical development and the team spirit of the crew of HG6N attracted contest operators from other counties and clubs. Our predecessors who have always been persisting in endevours of o

ur club and based on the traditions we have the honour to share the pleasure of success of all the achievements as follows: